Long before the success of Danny Boyle’s multi-Oscar winning film Slumdog Millionaire, based on the lives of various youngsters living in its cavernous slums, or the massive terrorist attacks a few months earlier on its historical and business landmarks that left hundreds dead or wounded and plunged the city into s rare standstill, Bombay was a city that fascinated foreigners and Indians alike with an alluring image of fabulous wealth and poverty living side by side, the endless teeming hustle and bustle of its streets, ports and nightlife, the glamour and proficiency of its film industry (now named Bollywood), as well as being a major Asian financial centre.

The name Bombay was most likely taken from the Portuguese who arrived there during the 16th century and named the area Bom Bahia (good bay), yet in the mid ‘90s the local powers-that-be decided to give it a more Indian name and renamed it Mumbai, after the Hindu patron goddess of the city. Technically both names are still permissible. Below are some quotidian images from the city: 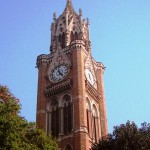 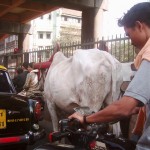 Always stuck in a jam! 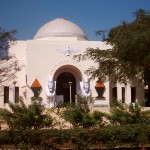 Bombay’s rich heritage of religious tolerance is evident in the Zoroastrian Fire Temple. The city is home to a large and influential Parsi community that fled centuries ago in the wake of the Muslim conquest of their ancestral lands. 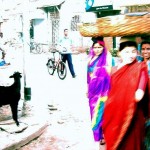 Commerce and sentient beings of all kinds are a mainstay of Mumbai’s avenues and alleys alike. 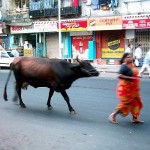 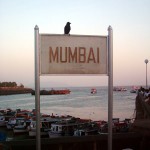 A rather ominous welcome to Mumbai’s crowded shores. 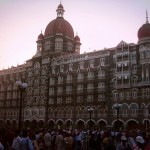 The Taj Hotel and the adjoining cafe Mondegar were the focal point of the terrorist onslaught and the running clashes that followed between them and Indian security forces. 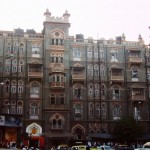 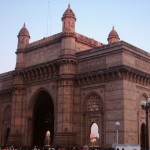 Despite being less than 100 years old the Gateway of India structure in S. Bombay has been witness to lots of history, as in 1948 the last of British colonial troops departed from there, and it has been the target of terrorist bomb in 2003, before becoming a back drop for the attacks that began nearby on November 26, 2008 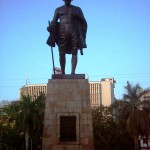 Homage to `India’s founding father is a common site throughout 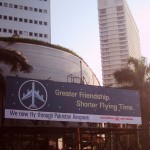 India’s precarious relations with its neighbour Pakistan are somehow usually in sight. 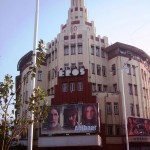 The city’s architectural diversity is clear in the Art Deco design of the Eros Cinema built in the 1930s and still showing the hottest flicks made nearby. In this case Indian film legend Amitabh Bachchan is the headliner. 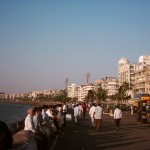 The cool breezes of Marine Drive are a welcome respite to the city’s often overwhelming heat and humidity. 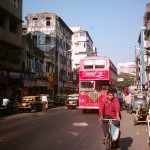 Even more than 60 years after the end of British colonial rule its influence can be seen on the streets in the form of double-decker buses.