Early Saturday morning (18th July) we set off in search of gorillas in the Mikeno Forests in Virunga Park, North Kivu, DRC. We were one of few tourists visiting Bukima (one of the park patrol posts) since rebels attacked the Gorilla Sector in September 2007. Even now Virunga Park is still occupied by militia (believed to be the FDLR) who conduct the illegal charcoal trade that’s destroying the parks but is also funding their (the FDLR) operations. Believed to be heavily armed and well trained, they represent one of the greatest problems for the park due to the illegal charcoal trade. Many of the Virunga Park rangers have been killed and attacked by the FDLR.

This is why the briquettes (an organic alternative energy source to charcoal) which Virginia and her team are working on implementing is so important because not only will it provide jobs, it will also of course help save the forests as 92% of charcoal used in Goma and Northern Rwanda comes from Virunga National Park. Illegal trafficking of forest resources, in particular charcoal, provides armed groups with one of their primary sources of income.

All these things aside I was eager to get up to Bukima (about 2-3 hour drive from Goma with terrible roads) as the view is fantastic…waking up in the mornings to see a view of Mikeno volcano, and the surrounding forests. No photo can do it justice!

In the photo you can see Mikeno in the background and at the foot is where you enter the forests.
We set off for about 1 1/2 hour of ‘easy’ walking before we entered the ridge of the forests and this is where the ‘walking’ got really tough. It is so dense and over grown…I lost count of the number of times I fell (my legs are one big bruise) and stupidly forgot suntan lotion (seeing as it’s pretty cold up at Bukima) and definitely didn’t pack enough water for the 6 hour walk! But of course the views and sounds made up for it…and of finally finding the gorillas after 3 1/2 hours of searching!

We were aloud to spend 1 hour with them, always keeping a distance of 7 meters. They are so totally chilled and relaxed, you could never imagine they are wild…the younger ones are very curious whereas the older ones seem as if they couldn’t care less about us being there. The hour we were aloud to spend with them past super quick and soon we were on our way again back to Bukima camp totally exhausted and in serious need of water but feeling so happy to have experienced an encounter with gorillas.

On the Sunday back in Goma we went for lunch at a place called ‘Chalet’, a restaurant/bar next to Lake Kivu. Beautiful gardens, people sitting around on the deck chairs, lunching, drinking…it felt so out of context…there was even some guy speeding past on a freaken jet-ski! Totally bizarre! 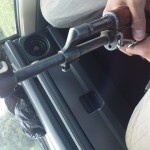 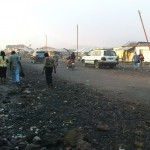 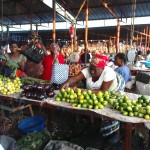 Shopping for my veg at Virunga Market, Goma 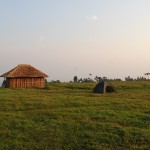 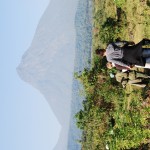 On our way…in search of gorilla 6 hour trek begins 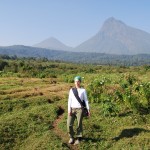 Bukima Camp with Mikeno volcano in the background and the forests we are about to enter in search of gorillas! Me looking all mountaineer 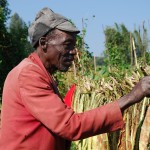 Man we saw along the way with his tobacco crop 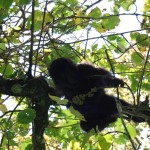 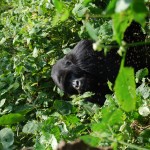 Gorillas – sideways…where do you rotate images in wordpress?? 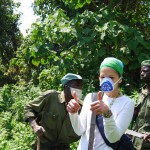