In June 2016, my friend Alfy and I kayaked, hiked and waded 1,300km from the source of the River Kwanza, deep in the Angolan highlands, out into the Atlantic Ocean. Our expedition raised over USD25,000 to fund The HALO Trust’s mine clearance work in Angola. If you are interested in a narrative account of what happened, please check out our documentary film, or better yet, buy a copy of our book. This is not a start to finish story of what happened, but rather a few snapshots of the risks involved for the folks here at Polo’s Bastards. Think of it as a checklist for anyone considering a long overland expedition in an isolated location in Africa!

Unglamorous as it may sound, in terms of probabilities illness was definitely top of our list of concerns throughout the nine months of expedition planning and the thirty-three day journey. We were kayaking through a subtropical region, and that meant exposure to Malaria and Dengue, plus a whole host of less-likely insect-borne diseases such as sleeping sickness, Chikungunya and Leishmaniasis. We were camping by the river almost every night, meaning we were absolutely destroyed by mosquitoes at dawn and dusk. Beyond taking Doxycycline as a Malaria prophylaxis and covering ourselves in 40% DEET, there was not much to do except cross our fingers and hope we did not catch anything serious.

This approach was going well until day 24 of the expedition, about 20km east of Capanda Dam. Our Klepper kayak had somehow been colonised by a swarm of small biting flies. We spent the day paddling around 40km in the blazing sun, while being bitten to shreds. No amount of DEET would dissuade them. Eventually, we chose a rocky hilltop to camp on, and hauled the Klepper kayak out of the water. Soon after unloading our gear, Alfy collapsed. Lifting up his shirt, I could see a bright red V-shaped rash on his torso, a typical indicator of an allergic reaction. Thankfully, a dose of antihistamines sorted him out and there were no lasting ill-effects. No need to whip out the Epinephrine shot! 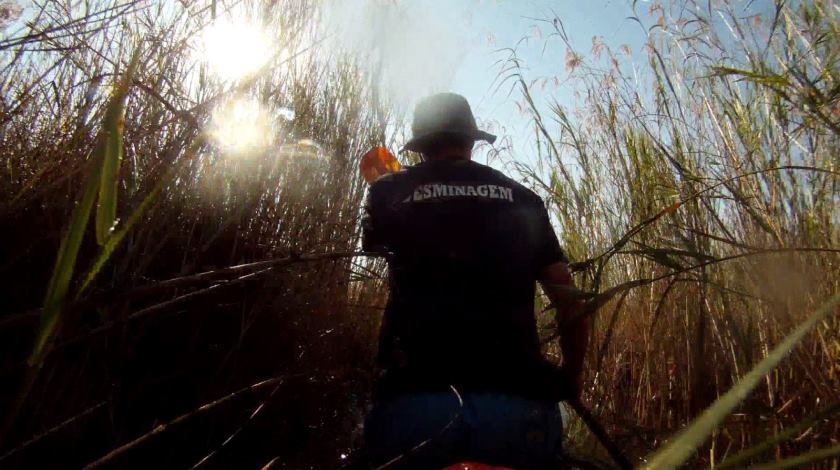 Angola’s rivers are home to a lot of very large Nile crocodiles (Crocodylus niloticus). Thanks to Angola’s lengthy civil war (1975 to 2002) there were no shortage of human bodies thrown into the rivers, and as in the neighbouring Democratic Republic of Congo, this has given at least some of the local creatures a taste for human flesh. A cursory search of crocodile attack databases (which tend to be incomplete) shows that every year tens of people are killed and eaten while using Angola’s waterways.

After speaking to local experts, we found out that the risk of getting attacked by a crocodile was very low, especially if we followed a few common-sense rules: no swimming in the River Kwanza, no bathing on the river bank and no kayaking in the dark. It turned out that the crocodiles tended to view our 5.45m long kayak as too large to tackle, and they gave us a wide berth. We did see some absolute monsters slip off the banks and into the river as we were kayaking along, but there were never any incidents involving crocs. That did not stop us worrying about meeting the same fate as South African kayaker Hendri Coetzee, who was pulled out of his kayak and eaten in December 2010 while on the on the Congo’s Lukuga River.

Experience showed us that we had vastly overestimated the threat that crocodiles posed to our expedition. The complete opposite was true for hippos. Anecdotal evidence suggests that hippos kill far more people every year than any other land predator in Africa. Very little data was available for exact animal numbers along the upper stretches of the Kwanza River, but we were able to speak to members of National Geographic’s Into The Okavango expedition, who have experience on the rivers in south-eastern Angola. What they told us was not encouraging: taking a rifle would be no use, as it takes specialised ammunition (not to mention a mountain of paperwork) to take down a hippo. Also, by the time you realised you needed to use your rifle, it would be way too late. Dr Steve Boyes, the Okavango expedition leader, was in a canoe that was attacked and flipped over by an aggressive three tonne bull hippo in July 2015. A year later, we headed out onto the Kwanza River armed only with three pieces of advice: do not startle them, do not come between them and the centre of the river, and do not cut off adult hippos from their children.

On our very first encounter w,e floated silently over the top of one, while breaking the first rule we had been told: never startle a hippo. It emerged half a metre behind our kayak and was very unhappy. Two weeks into the trip and we had already lost count of how many hippos we had been forced to paddle around or race away from. Some were alone, others were floating around or grazing on the bank in pods of up to ten animals. Our closest call came on the eighteenth day of our expedition, when we were chased up a tree by three aggressive males. We caught the aftermath on camera. 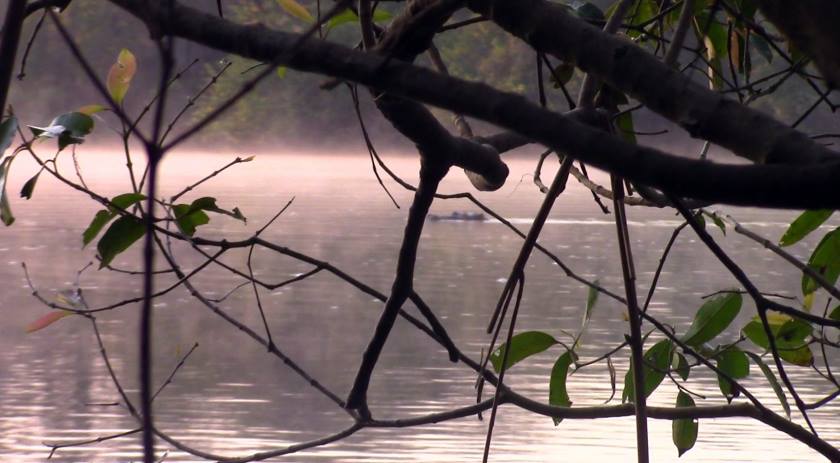 The Hippo that chased us up a tree. 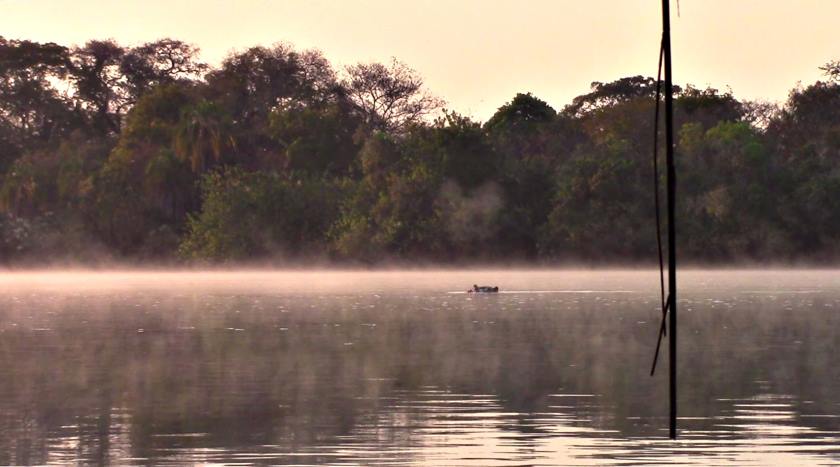 I guess this is a pretty obvious danger: kayaking a heavily loaded craft through rapids is inherently dangerous. Alfy and I came up with a simple solution to this problem: avoid kayaking rapids. On the whole, this worked, with us getting out of the water and portaging around white-water obstacles. However, it only takes one mistake. Local fishermen told us about two South African kayakers who drowned trying to tackle this set of rapids that we carefully hiked around:

Unfortunately, ten days into the expedition we made a poor choice in a small set of rapids that almost derailed the whole expedition. We tried to kayak in between a fishing dam that had been setup in the shallow water of a set of rapids. Instead, we crashed and sank the kayak, snapping it in half in the process and losing a load of our gear. Again, we caught the whole thing on camera. 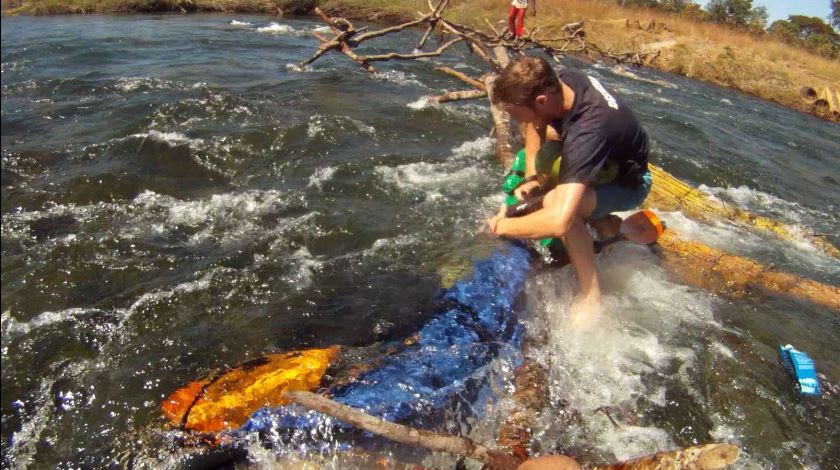 Of all the risks on our list, it was the human element that came closest to ruining the expedition. Angola’s River Kwanza is rich in alluvial diamond deposits. The upper stretches of the river are filled with diamond miners, dredging the river and destroying the natural environment in the hunt for riches. Some of the diamond camps were industrial operations with heavy machinery, watercraft and hundreds of workers. Others were small illegal mining camps, mainly filled with Congolese migrants. Either way, there were a lot of guys with guns, paranoid about being robbed and not keen for foreigners to see what they were up to. A number of Angolan experts told us before the expedition that these garimpeiros (as they are known in Portuguese) would pose the most significant risk of the trip. They could not have been more wrong! 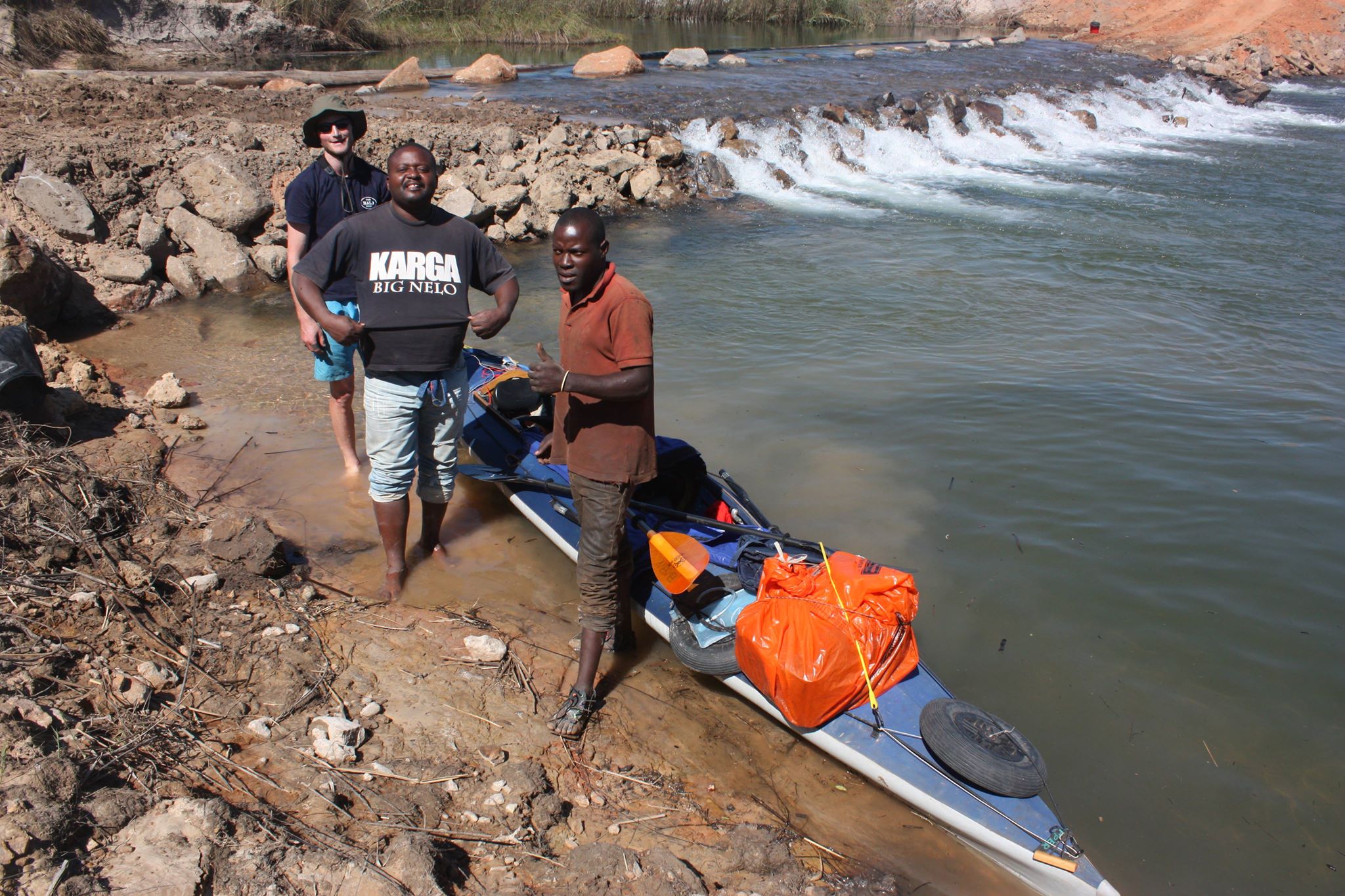 Every diamond miner we encountered was initially confused and then incredibly welcoming. Once we had explained what we were doing, and that we had no interest in diamonds, the garimpeiros allowed us to camp with them, gave us advice about the rapids and occasionally even sold us supplies. It was a set of diamond miners outside the mining town of Camacupa that came to our rescue after we crashed and sank out kayak. Interacting with these guys, whether they were Angolan, Congolese, Portuguese, Lebanese or Mauritanian, ended up being one of the highlights of the journey.

However, Angola’s diamonds also proved to almost be our undoing. Twenty-five days into our expedition, we were hauled out of our tents at gunpoint while camping near Capanda Dam. The local security forces initially accused us of spying on the hydroelectric installation, but after four days of detention and a lot of arguments, it turned out that they were actually suspicious that we were smuggling diamonds. They simply could not understand why else we would choose to kayak along those stretches of the river. All of our paperwork, all of our permits and visas and stamps meant nothing: they wanted to know how we were making money and where the diamonds were. In the end, we were driven 375km back to Luanda (Angola’s capital city) and threatened with deportation. It was only thanks to the intervention of the Italian and British Embassies, as well as the Minister of the Interior, that we were finally released and allowed to complete our expedition. 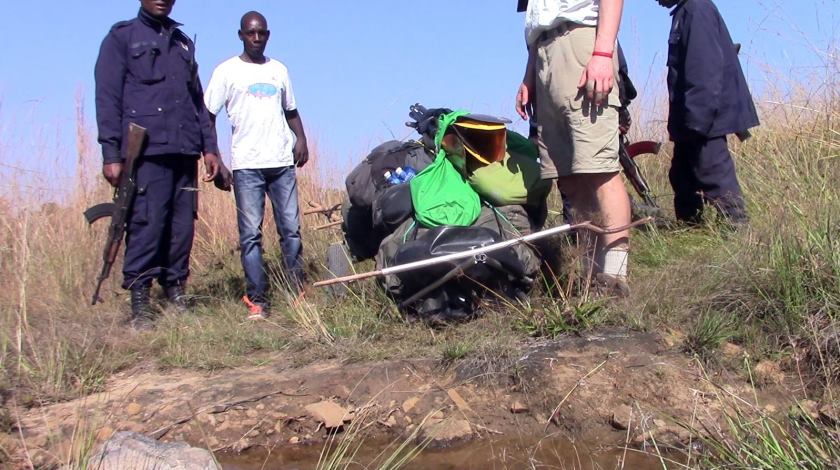 We spent nine months planning the expedition. We mapped out bush landing strips for light aircraft and routes down to the river for 4x4s in case we needed a medevac. We sent our GPS locations in to our support team via satellite phone every day. We carried enough drugs to kill a small elephant. We tried to map out the main hazards on the river and planned ways to avoid them. We spoke to everyone we could find who had any experience of overland travel in that part of the world, and topped up our knowledge by quizzing all the diamond miners we met along the route. But in reality, from the outset we were only able to mitigate a proportion of the overall risks. A hippo could have easily sunk our kayak. A crocodile could have pulled us out of the kayak, as occurred with Hendrik Coetzee. Things could have gone much worse in some of the rapids that we chose to tackle rather than hike around. We could have been shot (either accidentally or deliberately) by the AK-47s pointed into our tents as we were arrested. Despite all the planning and training, Alfy and I both admit that to a certain extent we got lucky. But do not let that put you off. With enough planning these kinds of journeys can be done!

For more information about our expedition, you can watch the 52 minute documentary we made here. Better yet, please buy a copy of our book from crowdfunding publisher Unbound. We will be donating 25% of the profits to support The HALO Trust’s mine clearance work in Angola. Hopefully together we can help make Angola landmine free by 2025!