since I’ve posted on here, sorry for that! Since being back in Bukavu after my adventurous couple of days in Goma I’ve been a bit occupied and internet here in Bukavu isn’t so easy to come by as it was in Goma (the people I stayed with in Goma had wireless in their house! 24/7 access to the net!! That’s of course only when the electricity was on. Daily Power failures and water cuts are the norm). But anyhow, somehow you start to loose track of time…and become use to being disconnected. I’ve seen and experienced a lot of course since my last entry. From visiting the gorillas up in the Mikeno sector of North Kivu to seeing the briquette distribution/production in and around various villages in Goma. I also accompanied the briquette team to see the distribution of briquettes to the various IDP (Internally Displaced Person/People) camps on the outskirts of Goma. The camps that I am aware of are: Bulengo, Mugunga 1, Mugunga 2, Mugunga 3, Buhimba, Kibati II. Due to recent insecurity and fighting in their villages (by the militia groups) they are all currently displaced, living in the various IDP camps. Merci Corps, an NGO working in the camps, buy the briquettes and once a week a truck goes out to drop off sacks of briquettes to the various camps. My mode of transport: once big mother of a truck! (see photo). You can easily spot the camps from a distance, a sea of white plastic with the UNHCR logo printed on. The plastic is used to cover the little make-shift shelters made with branches, leaves etc. Row upon row. I’ve read so much about the recent violence and insecurity that caused the people to flee and seen so many photos…but nothing can really prepare you for when you actually enter these camps. Of course you feel totally hopeless and it certainly is no place for your own emotional reactions to take over, but every time I was blown away and totally enjoyed the hundreds of children…and despite the dire conditions they live in they are always smiling…it’s heart breaking for sure. The camp we visited was Mugunga 2. Here I met up with Joseph Ntangi, who works for Merci Corps and oversees the distribution of the briquettes in Mugunga 2.

At the IDP camps outside of Goma

Children at the IDP camps

Truck to IDP camps outside of Goma

I also attended a party in Goma which was attended by a mix of various NGO workers, most of whom are all based in Goma and working at the various IDP camps. It was interesting hearing all their stories of the work they do but also unnerving hearing their reports of the ‘gossip’ doing the rounds currently that ‘the sh*t is about to hit the fan again, all the signs are there’ (i.e. more insecurity and fighting erupting etc…) but I try not to pay any attention to it…besides I knew the situation was pretty volatile here before I came.

Back in Bukavu I continue to assists at the malnourishment centre in the mornings. Children continue to come and go, some get better, some don’t…however little Rachelle (about whom I’ve written before in one of my previous posts has taken a turn for the better and has now gone home. Any donations to the Malnourishment Centre will be greatly received. Thank you very much.

In the afternoons I’m ‘hanging with the nuns’ at the congregation, ‘teaching’ basic English and in return they help me with my French…all and all a bit disastrous but great fun! Little Rachelle is much better now and has gone home I get around by taxi and the price changes on a daily basis, depending on how much I can haggle it down to…they see ‘muzungu’, they see cash… in my case isn’t true! (the Congolese refer to whites as ‘muzungu’) I get around on foot too, if the distance isn’t too far. The only thing getting up my nose here, quite literally, is the dust…and there is a lot of it! At the moment it’s dry season, so no rain from about June to September. I’m suffering big time with my hay fever and am having several nosebleeds on a daily basis. As for the family I’m living with…it’s a busy house, never a dull moment! There’s Franck Mutula, his wife Nicole and their 5 boys (Jannick (8), Frannick (6.5), Francis (4), Valery (2) and Donnel (6 months).. Then there also is Katie (sister of Nicole), Melanie (cousin of Franck), Chantal and Papa Meda, the 2 house aids. At the moment it’s madness in the household in preparation for the wedding of Franck’s brother, Oscar, which will take place on Friday the 7th of August with about 300 guests attending…an all-day affair which will start at 9am and finish at goodness knows what time. One of the ‘preparations’ involved 2 goats being slaughtered outside my bedroom window! You can always recognise whenever a wedding is happening in town thanks to a procession of cars decorated like Christmas trees, honking continuously and driving very slowly…slow enough to get a good glimpse of the passengers, all dressed up smartly in outfits made of Congolese cloth. Its tradition for the family on both sides of the bride and groom to wear outfits made from the same cloth for the church ceremony. They then change into smart casual clothing for the evening reception. My Congolese family are kindly making me my own outfit from the same cloth (for which I’m very grateful seeing as I didn’t exactly bring anything ‘fancy’ with me to DRC and it not as if I can quickly pop over to the nearest Debenhams!). Yesterday (Sunday the 2nd August) we attended a ceremony called ‘dot’ in French (meaning to give), in Swahili its ‘Maki’, where the husband-to-be’s side of they family visit the wife-to-be’s side of the family to present them with gifts (which in this case was 3 goats, beer, a barrel filled with fufu (maize) and 3 cows. From the photos you’ll see it was quite a big affair with loads of family members from each side attending. First the husband-to-be’s (Oscar) side of the family gathered at the family house, then we all made our way to the bride-to-be’s (Solange) parents house. Oscar and Solange are not present at this time. They are not allowed to be seen until all negotiations have been completed and agreed. After presenting the gifts to Solange’s parents we all gathered in the house of the representative for Solanges’ family, where we were all fed…and then waited for the families to agree and accept the gifts…which they did (thank goodness! We waited so long I was starting to wonder if the negotiations had gone wrong!). Finally the answer came, they were happy and the gifts were accepted…then all hell broke loose as both families joined in a frenzy of dancing and singing. It is at this time that Oscar and Solange present themselves and join in. I asked Franck (my host) if Oscar and Solange knew each other before, as I though this was an arranged marriage. He told me yes, they have free will in choosing their partners and that presenting the gifts to the family of the bride is just tradition. I know that for many African cultures this practise is the norm. In South Africa this is usually referred to as ‘labola’ (presenting the family of the bride-to-be with gifts of goats, chickens, cows etc.)…although I’m not sure if ‘free will’ in choosing whom you marry always plays a part).

I’ll be sure to post again after the wedding, with loads of photos (if I get a strong enough internet connection!). 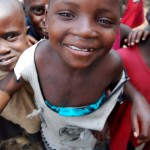 Children at the IDP camps 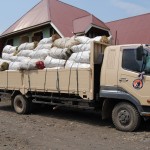 Truck to IDP camps outside of Goma 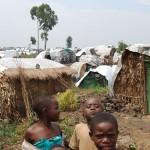 At the IDP camps outside of Goma 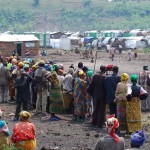 IDP Camp outside of Goma 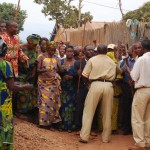 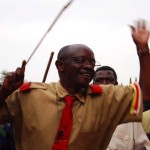 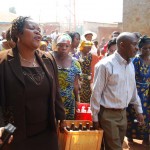 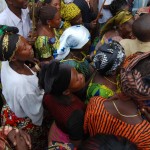 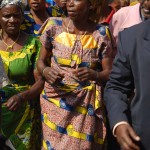